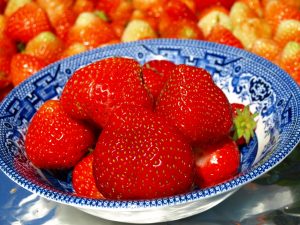 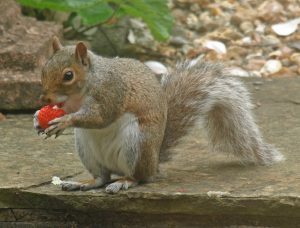 A principle idea of permaculture and no-dig gardening is to develop ground cover.   Uncovered soil attracts unwanted weeds , allows the soil to dry out, and is not contributing to the Eco-system.  In accepting this principle I was prepared to accept some degree of what some would think of as weeds.  For example I tolerate docks, they are deep rooted and can do a similar function to comfrey; they drag up minerals and trace elements that have been leached down through the soil.  Dandelions have the same ability, and their flowers are adored by bees and other pollinators, just as long as you cut them back before they seed!  With this anarchic approach I mistakenly allowed buttercups to establish in our garden.  Bees love their very pretty yellow flowers, they are very effective at covering bare soil, their web of fibrous roots are great at holding soil in place.  They should be a very useful plant for the herbaceous layer in a forest garden, and when my friends pointed in horror at the parsley like leaves, I cheerfully said that I wasn’t in the least concerned about them!

How wrong can you be?

Two years ago we made some 50 pounds of strawberry jam with our own strawberries.  We have used strawberries as a ground cover as well as a wonderful cropping plant, last year (2016), however, we had very few strawberries.  It was, apparently, a poor year for strawberries, and those that did manage to grow were quickly pounced upon by the squirrels and mice.  We were last in the queue, but there was relatively little to queue for!

Part way through the year we decided (were told) that the creeping buttercups that had colonised so much of our garden were also part of the reason.  We launched an offensive, with stalwart support from the friend who had pointed out the buttercups as a culprit, but, for last year, it was too late!

This winter and early Spring we continued to try to get on top of the buttercup problem. Here is a photo of one plant pulled from one of the graveled areas, so the roots came out whole.  Scary! 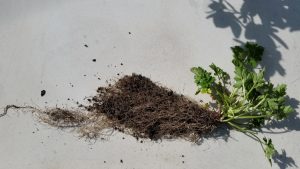 I have heard that buttercups have a special way of achieving dominance in a garden by putting a chemical into the soil which limits the growth of competitors.

Anyway, whatever the rights and wrongs of our prejudice against the creeping buttercup, this year we appear to have a potentially record crop for ourselves, the squirrels and other rodents!