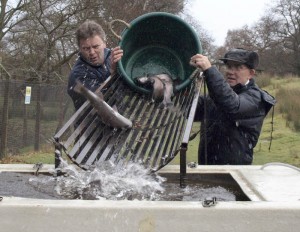 16-acre spring fed natural lake in quiet surroundings, with private car park at the lakeside. Three boats are available for anglers. The lake is stocked regularly throughout the year with rainbow trout, and there is also a good stock of brown trout. Carp fishing is also allowed on part of the lake. The Elan Valley reservoirs and Llyngwyn Lake are Troutmaster waters.
The Association has a fish farm very near to Ty Olaf cottage. Some while ago I did a photo essay of the process of collecting trout from the fish-farm and transporting them, in an oxygenated trailer to Lyngwyn. The photographs accompanying this blog are from that occasion.

Alan Lewis of Hafod Hardware in the town, tells us that one of the earliest Commonwealth Championships was fished in Wales, in the Wrexham area. This year the Welsh Salmon and Trout Angling Association, working with the Angling Associations of Rhayader, Builth Wells, Clewedog and T 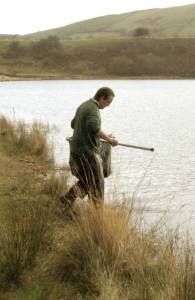 al-y-llyn, has created a challenge in settings that the leading world fly fishermen will thoroughly enjoy.

To mark the opening of the event there will be a parade around Rhayader, it won’t quite be up to the standard of an Olympic opening event, but it will be colourful and fun. The parade will be led by an Ouroboros dragon and the local brass band, followed by all the Commonwealth teams with thei flags, the ch 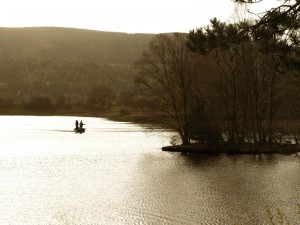 ildren from two local schools and the Rhayader Girl Guides with our community flags. CARAD, the local arts organisation have also organised local volunteers to embroider a banner with all the flags of competing nations.

You can link to Rhayader Angling via our Links page.