We were on one of our regular walks as far as Caban Coch dam.  As we went past the Visitor’s Centre we saw that the footpath had been closed by a large van with a sizeable gang of young men who were unloading it.  We decided, as we got closer that they were unloading a stage.  Was it going to be some exciting music gig below the dam?  We asked one of the young men.  “I can’t tell you!” He replied, “other than to tell you it’s going to be epic!”

Later on that day it became clear – they were unloading, and setting up the four letters E P I C, in mirror finish letters.  The valley had been chosen for the next phase of Visit Wales‘ marketing campaign to promote Wales as an adventure destination.  It is an innovative traveling art installation of giant mirrored letters standing four meters high 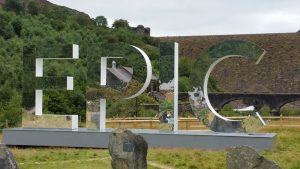 and 11 meters wide forming the word “EPIC”.  The installation is popping up unannounced at various locations across Wales over the summer as part of the Year of Adventure campaign, and, this week, it is augmenting the epic proportions of the Caban Coch dam.

We continued our walk being very aware of that the heather and other flora coating the hillsides are beginning to change into their Autumn colours, while the Rowans are loaded with fruit.  Now that is epic!