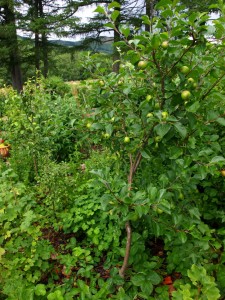 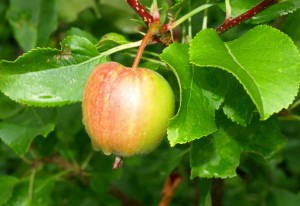 I referred in a recent post, headed “Countryfile”, to “Our garden, which is a rather odd garden worked on, occasionally, by a rather odd gardener.” That reference reflected the way in which I had begun to think of the garden. The central section had, ambitiously, been planned as a forest garden. It is a fairly small space for such an ambitious plan, but the Forest Garden principle can be used even in small spaces. 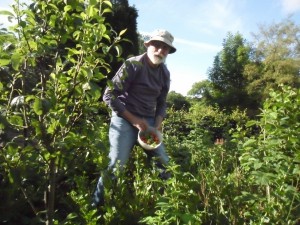 A few quotes from Martin Crawford’s excellent book “Creating a Forest Garden – working with nature to grow edible crops” (ISBN 978 1 900322 62 1, pub Green Books) show what attracted us to the idea:
“A forest garden is a garden modeled on the structure of young natural woodland, utilising plants of direct and indirect benefit to people – often edible plants. It may contain … trees,shrubs,herbaceous perennials, herbs, annuals, root crops and climbers, all planted in such a way as to maximise positive interactions and minimise negative interactions, with fertility maintained largely or wholly by the plants themselves.”
“The further your agricultural or horticultural system is from woodland, the more energy it takes to maintain and the more disturbed and distant the system is from a long term sustainable biological state.”
“Forest gardens … form some of the lowest-energy-input systems for producing useful products.”
I cannot claim to have any real understanding of how to plant “in such a way as to maximise … etc”, I am much more of a novice. Martin Crawford has an encyclopaedic knowledge of plants and their interaction, but even so expresses the complexity of trying to model the interactions of dozens or hundreds of species. I was very attracted to the idea that such a style of garden uses less energy. As we move towards peak oil ( if that is not already passed) and big oil frantically tries more extreme methods of production, such as fracking, it is import for the resilience of human use of this planet that we find better ways of working within it’s constraints. On a more prosaic level, as a man in his seventies I am keen to find a way of tending my land that uses less physical energy too!
Our village is built on a “groe” that is a valley floor where a meandering river has ejected banks of pebbles and alluvial soil. Not only is the soil very stony, but when our cottage was built tons of subsoil and stone were dumped on top of soil that had been gardened by generations of previous occupiers. 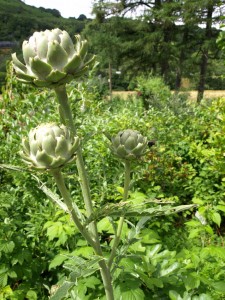 I began a process of digging and sifting the soil, aiming to get a light, free draining loam, but, of course, in the process I was traumatising the soil, destroying the past structure. While doing so I was also beginning to plant our forest garden, but having to put many plants in “temporary” situations, which have, as time has gone by, become more permanent than I intended. Those two are the negatives about what we have done. Each winter I try to correct the layout and get these temporary placings into better situations, and meanwhile the soil repairs itself, helped by mulches of manure, compost, leaf mold and cut vegetation. 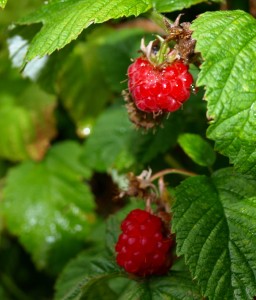 The most magic part of this repair relates to fungal activity within the soil, here is our friend Daniel Butler writing in his blog (http://www.fungiforays.co.uk/):
“Most fungi have an ectomychorrhizal relationship with a host plant. This means they sheath the host’s roots with their mycelia while sending out thread-like hyphae into the surrounding soil to collect nutrients. It funnels these back into the tree in exchange for sugars and water.” I understand that it takes about three years for this process to re-establish itself in disturbed soil. Which just happens to be how long since the largest section of my garden was dug! 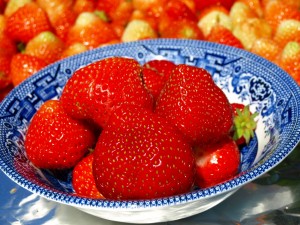 During that period we have, as you know, had two of the wettest summers on record. Years when, if it wasn’t raining then the midges were dancing around chorusing “Come on punk, make my day!” My confidence as a forest gardener was ebbing, and one result was the reference to “a rather odd garden, … etc”. The process that Daniel describes works a bit like “Light the blue touch paper, and retire” and, as it happens the timing of the mychorrizal process has co-coincided with the best cropping year, maybe for a decade. Suddenly we believe in our garden again, experientially! The last few weeks have had one overriding priority – to process all the fruit cropping in our forest garden! We absolutely love it! We want to bore everyone we meet by singing its praises. Forest gardens work, there is nothing odd about them at all! 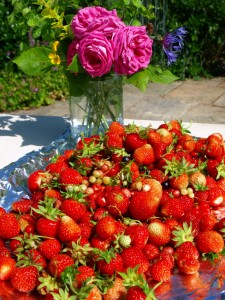 Maggie and Peter retired to the Elan Village after running the Drovers Tea Rooms and Restaurant in Builth Wells for 13 years. Professional standards and a warm welcome have been the basis for their success in the hospitality field.
We use cookies to ensure that we give you the best experience on our website. If you continue without changing your settings, we'll assume that you are happy to receive all cookies from this website Accept & Close More about cookies here.
Privacy & Cookies Policy
Necessary Always Enabled