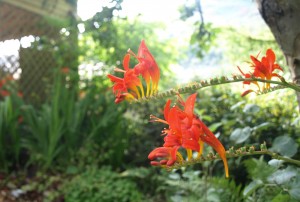 Crocosmia is flourishing in the shaded garden 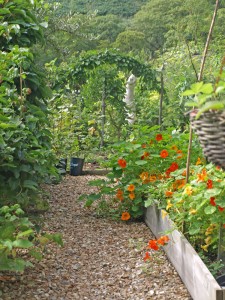 Looking past the nasturtiums in the raised garden to the Lime wall.

Maggie came up with the idea. We could offer our garden to the Bracken Trust for a coffee morning. It would help them to raise funds for their essential work supporting local people with cancer. Saturday August 1st was to be the day. 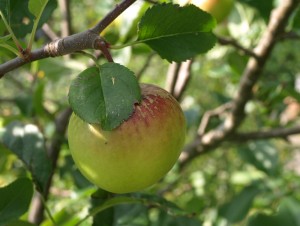 One of serveral eating apples.

A visit was organised for members of the Bracken Trust social committee to see what facilities we could offer. Brenda, the chairperson, has to use a disability scooter, so these visits are a major undertaking, but good because it immediately highlighted some shortcomings in access. We had designed the access around the garden to allow wheelchairs, but nowadays most people who need help, use small wheel, powered, vehicles. 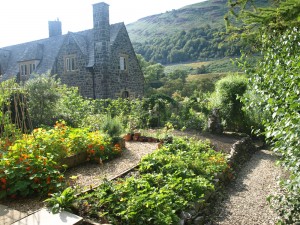 This bed of strawberries looks north-east, will it produce?

The inspection visit went very well, but we had to have tea sitting in the garage because of the difficulties with scooter access, it was, nonetheless, a joyful occasion. Two days after the visit we had wooden ramps in place to smooth out a couple of steps. The thing that took me aback was the enthusiasm that everyone showed for our garden!. They were seeing it in a totally different way to the way that I see it. “I didn’t think things could grow like this in this country!” was one reaction! 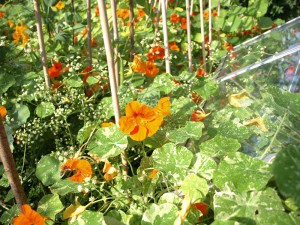 Self seeded nasturtiums took over the raised bed.

Maggie and I love our garden and see beauty in it, but I do not expect people whose idea of gardens are formed by the garden industry, with novelty coloured flowers in prim borders, or vegetables in clean, straight lines, to look at our highly productive, natural garden and see the same degree of beauty. 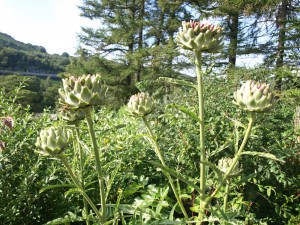 Artichokes a few more each year.

I was strimming the grass in front of the house the day before the Coffee Morning, when I saw George McManus, who gardens for the hotel across the river, trying to look into our garden. He told me that the town council had asked him to review local gardens for some sort of competition. I invited him in and showed him around, and I was delighted that he appreciated the garden, telling me that he likes natural gardens, and that that is his style. 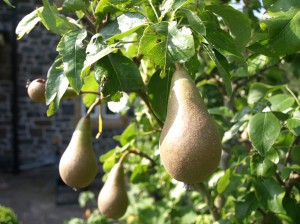 On the day of the coffee morning we were woken at 6am by the rain lashing against the windows, by 8:30 the rain had stopped, but it was leaden and damp. The sun began to break through, and, by the time the helpers arrived it was very pleasant and everything had dried out. We had a brilliant day and the Trust made a great deal of money from stalls which offered, among other delights, jams and cordial made from our wonderful harvest of soft fruits and plants propagated from the shrubs in our garden. 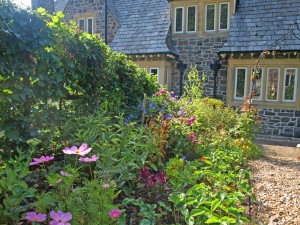 The cottage garden looking towards the house.

Part of the morning was to be a talk by me, about Permaculture and Forest Gardens and a tour of the garden. Two dozen to thirty people listened, apparently with great enjoyment and interest to the talk, and were able to sample a very pretty salad of nasturtium flowers and leaves, lime leaves and lemon flavoured sorrel, all picked in the garden that morning to illustrate some of the less usual salad possibilities. 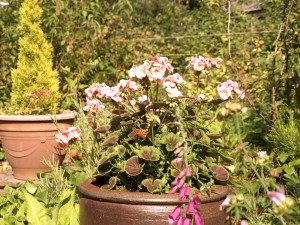 Pots of colour brighten the mass of green!

We were expecting the arrival of friends on the Monday, but they had been very delayed. At some point I noticed that a car was parked in our drive, thinking it may be our friends, I rushed out, but arriving at the gate I saw that the car was being reversed out of the drive. I checked to see if I could help, but the response of the people in the car was to congratulate me. They told me that I had won the garden competition, something that has since been confirmed by the Clerk to the Council 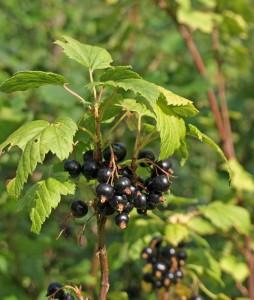 ! We have what is considered Rhayader and district’s best kept garden of 2015!

So it seems that the garden, this piece of Nature’s glory, is appreciated for what it is, and is potentially, a really valuable tool for introducing the concepts of Permaculture and of Forest Gardens. During the coffee morning I was being asked for advice about gardens, I have suddenly become an accepted local expert! It now is up go me to find ways of utilizing that and spreading the word. The garden that we found when we bought the house had been neglected but had potential, but even the most bleak, damp or exposed space of builder’s rubble can, with time, be encouraged to return to being a natural, food filled, corner of paradise.code>

Maggie and Peter retired to the Elan Village after running the Drovers Tea Rooms and Restaurant in Builth Wells for 13 years. Professional standards and a warm welcome have been the basis for their success in the hospitality field.
We use cookies to ensure that we give you the best experience on our website. If you continue without changing your settings, we'll assume that you are happy to receive all cookies from this website Accept & Close More about cookies here.
Privacy & Cookies Policy
Necessary Always Enabled