Frequent visitors Neil and Barbara were here in early May.  A characteristic of their stays is that they travel widely, always attracted to bird reserves, and wildlife resources.  They went on one of their favourite trips, to Llangrannog.  They came back very excited, and no wonder! As they walked along the cliffs they spotted gannets plunging into the sea, probably after a shoal of herring or mackerel, within a few moments a pod of dolphins was right below them in clear view!

When they got back to Ty Olaf Cottage they were, understandably full of it, and, of course, we decided that we needed to go there ASAP!  So, two weeks later, when the tide should have been at a similar level, we found ourselves with a spare day and set off.  It was a very grey day, with the possibility of light rain, and a very misty start.  As we drove down the coast each promontory took us up into the mist, but Llangrannog was hinting at sunshine.

My parents had once had a caravan quite close, and we had stayed once, walking over the cliff tops to Llangrannog.  It is a little village crammed into a gorge that comes seawards from a waterfall. 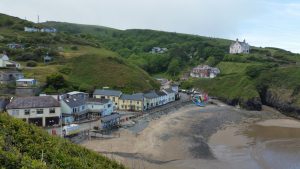 As the gorge opens out to the sea so the village spreads out to some cafes and the excellent Pentre Inn.  On that occasion we had not gone any further north, but, just less than a mile that way there is a peninsular which leads to Ynys Lochtyn, and this was where our friends had seen the dolphins 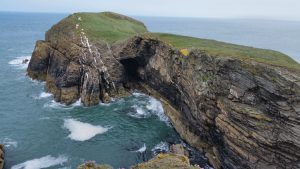 , it is also well known as a place where grey seals can be seen.  Cardigan Bay is well known as a place where dolphins and porpoises can be seen skirting the peninsulas, while the little bays, completely cut off at high tide provide excellent birthing places for grey seals.  The Pembrokeshire word for a baby seal is “morlo”, I expect that extends into this part of Ceridigion.

We may not have had the excitement of seeing the animals we had hoped to see, but the sheer joy of walking along the cliff path and on 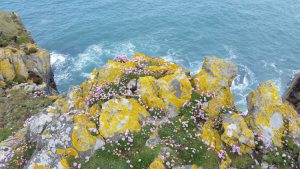 to the peninsula was more than enough.  The cliff top was covered in wonderful little pinks and other flowers, tough enough to stand against the sea winds and to cope with the dry cliff top conditions. 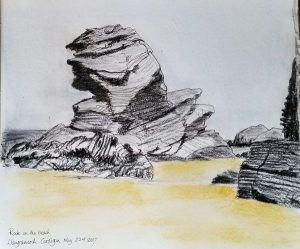 We walked back to the village for an excellent lunch at the Pentre Inn, and then I enjoyed an hour or so drawing the incredible rock formations in the bay.