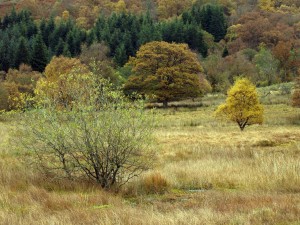 ‘In This Place’, is the new exhibition at CARAD’s Rhayader Museum & Gallery, it opened on July 2nd, but as we were on holiday we only got to see it the following week. Maggie and I went around the exhibition separately, as we were doing our morning as Museum Volunteer Receptionists. We both returned to the desk moved beyond words. On the surface the exhibition is an exploration of what five features in our local landscape might have to say if they could, what they’ve seen and how they feel about it. Rhayader Museum & Gallery staff and volunteers have given each feature in the landscape a sense of identity and explored that through photography, sculpture and creative writing. I had been one of the volunteers contributing to the development of the event.

The exhibition looks at the natural history of the area as well as how the landscape has changed under the influence of mankind. Rhayader by Nature, a local natural history group, has provided all the information to build a picture of the incredible biodiversity that each feature is a part of. The exhibition aims to promote awareness about our local environment as part of the International Year of Biodiversity.

Kerena Pugh, Volunteer Co-Ordinator for CARAD had contacted me last year. We had contributed to a project called “Here and Now” which looked at the Museum’s photographic archive, but also looked at the possibilities of extending it with pictures relating to the present. Kerena outlined the concept behind the planned exhibition. Would I photograph a near-by peat bog in the different seasons of the year? I knew that there were peat bogs in the Elan Valley, I had seen archive photographs of men cutting and drying peat; but how would I recognise one, and what was there to photograph? I had photographed the Elan river near our house, photographing the same stretch every time the season or the river state changed, so once I had been given a map reference for a nearby bog, I set off to get the initial shots.

Over the period of most of the next year I went, occasionally, to the bog. The bog is a flat area, surrounded by the buttresses of Cnwch and Gaffallt. There is a stunted tree standing alone in the bog, so I used that as a reference point. It gave me something to point the camera at in an otherwise apparently featureless landscape, and it changed from season to season. 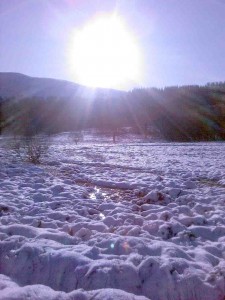 On New Years Day it snowed quite heavily. The local hunt was due to start from the village and we thought we might see what was going on, but, by the time we got out the hunt had moved off. We began to walk up the hill through the woods, and, having started in that direction continued up towards the valley between Cnwch and Gaffallt. My camera was temporarily out of action, but as we passed the bog we took some photos with the 3 mega pixel phone camera, which turned out to be very attractive, but, of course, the file was quite a small one. Because of the small file we could not use this photograph in the exhibition as it pixilated when blown up, but I include it here. We continued on a walk which turned out to be really memorable. 16 inches of snow had fallen on the top of the hill, near the Clyn, and the scenery was spectacular. The phone camera was used several times more.

I returned to the bog in what should have been Spring, but the ground was still frozen and not looking very Springlike. A few weeks later it had been planned to have a series of writer’s workshops led by Tom Bullough and Rebecca Ray, the different workshops would each concentrate on one of the five landscape features. Not really surprisingly the invitation to write creatively about something which appears as flat and uninterestingly as a peat bog did not prove 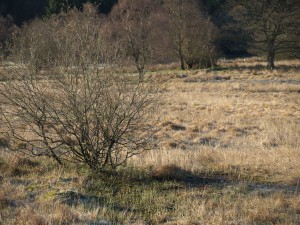 attractive to anyone. I had been invited to be a part of the workshop and to talk about the bog! I could talk, for a very short time, about photographing it, but what if people started asking questions about it? Hurriedly I did a little web research into peat bogs and immediately this flat, uninteresting patch of land, a space between landscape features, began to take on character.

The bog is a place of beginnings, it is the place where water collects, is held, until it becomes a watershed. This particular bog sheds water to the north, to become the tumbling stream that passes through Phil Bennett’s farm, collecting more water from the rhos where Travis the horse grazes, to fall over rocks between the Lodge and the Manager’s House in Elan Village to join the Elan; and, it sheds water to the south to become the Dulas, flowing through Blaen-y-cwm to join the Wye at Llanwrthwl.

The vegetation of a bog is unique. Sphagnum moss holds water and is held by water. The symbiosis of sphagnum and water creates an environment unlike any other. Inside the bog, there is little life, but no rot. 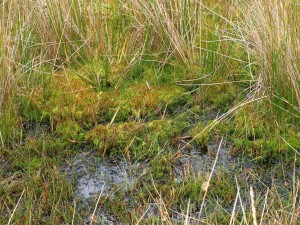 Roots of more conventional plants cannot survive in it, which is why that little tree in the centre of this one is so stunted, and why, very occasionally, human bodies are found, preserved for hundreds of years in the black depths of bogs.

The writer’s workshop, now just Tom, Rebecca and I, visited “my” peat bog, I took a few Spring pictures and we talked about bogs, and looked at this one. Again the process is at first negative. Tom encouraged us to think about what is there, and what is not. This is the poem that Rebecca wrote after her visit.

I know no love
I know no sadness.
The watershed that mothered me
is one bare rising hill.
Eight times my weight in water
I hold within myself and
do not sink.
I know this place.
I am this place
Where the transpiration of years, events,
north eastern wind – insistent wind –
I clench against
Self protecting.
Sometime aeroplane, clipping the edges of
my visible sky.
Sometime root, intruding and repelled.
Through the cycle of grasses, death and life
I am enduring
Self protecting.
Sometime corpse – animal or human – enveloped
in me.
Beneficiary of stillness.

Becky’s poem is on a panel in the exhibition, next to a wonderful stand which is peat bog, living mosses and grasses in water, my photos and an intriguing display looking a bit like zested oranges, but representing pollen grains swirling in the air, some of them falling into peat bogs and being stored for hundreds of years in its dead but un-decaying heart. Around the walls of the hall are sentences in English and Welsh that begin “In this place / … “ In the peat bog area it reads: “In this place I hide beneath my surface a priceless record of the Welsh landscape and its people. Yn y lle hwn, cuddiaf dan fy wyneb gofnod amhrisiadwy o dirwedd Cymru a’i phobl ”

The exhibition has been curated by Carrie Canham and has been created by local people, most of whom have volunteered their time to create a beautiful, lively and thought-provoking exhibition. Volunteers of all ages have got involved in a huge range of activities, from writing poems for display to making models of pollen grains and flowers. Because of the way that the displays are created some aspects are very professional, while some have a delightful naivety, all of which adds to the emotional impact of an exhibition which touches the very core of the place in which it is set, and the people that live in this place.

Carrie Canham, Curator said “this has been an inspirational project to work on. The commitment of everyone taking part has really brought the museum into the heart of the community. It’s given me an opportunity to learn a great deal about the natural history of the area, We plan to evolve the exhibition through further events and community projects while it’s open, so that, like our landscape, it will always be changing in subtle and beautiful ways”

‘In This Place’ will be open from Friday 2nd July until 30th October, Tuesdays – Sundays
10am – 4pm.