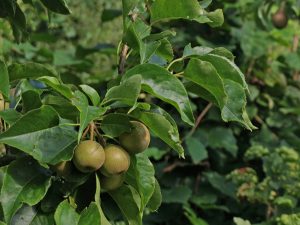 We have a few pear trees in our Forest Garden, at least two Conference, and a dessert pear, and then I have also got a Perry pear. They can be frustrating, because they all fruit very well. If you buy pears from a shop the chances are, that when you buy them they are too firm to eat. This is because, if the greengrocer or supermarket keep them until they are edible, we won’t buy them because they are too ripe! Once in the fruit bowl they sit there, very inviting but still too hard to eat, suddenly they are overripe, and so juicy that you need to sit in the bath to eat them! Well, it’s the same on the tree. You are delighted with the potential harvest, dozens of gorgeous looking fruit. Every day you check them, they look so inviting, but maybe still a bit small, and definitely too firm to harvest, so you leave them another day. Suddenly your harvest has disappeared. The narrow part of the pear, nearest to the stem, is the first to begin to ripen. A busy tit, searching for insects decides that they would like some dessert, they manage to find that the pear nearest the stem is a little softer, and the pear falls to the floor, and, within minutes has disappeared! Well that is my experience anyway! I have tried picking them hard, to keep, accepting that they could have grown a bit more; and that way we get to enjoy at least a few of our pears. Well, that is our experience of Conference and dessert pears, but we also have a Perry pear tree. One of my very early purchases, it sounded interesting, with visions of crushing pears to make a wonderful drink, memories of Babycham!!!
To be honest I forgot what it was! I had bought it with others and then struggled to find places to plant all these new trees and shrubs because I wasn’t succeeding in preparing the ground fast enough; and, anyway, I am very lazy about keeping track of what is what. I always think that when something fruits it will be clear what it is. So …. when the Perry pear fruited I decided it was a russet apple. I couldn’t remember planting a russet apple, but that did not deter me. I left these little “apples” for quite a while, because they did not appear to be ready to pick, but eventually had to harvest them. They didn’t work too well in the juicer, which tried to go into orbit as it battled these little rocks. I tried eating one but quickly decided that that was an idea not to be repeated. Eventually they did soften enough to go through the juicer, but we had to add honey to the juice to make it palatable. So not very encouraging!
The tree produces dozens, maybe even hundreds of little fruits, so around August last year I thinned down the bunches, in the hope that the remaining fruits would ripen. I also caught up on the research to realise what it was. When I did, at last, harvest, the crop it filled quite a large trug. Probably about 3 kilos.
We don’t have any equipment for handling cider or perry making, and I felt rather daunted by the idea anyway, so I did some further research and converted a few of the pears into a chutney, which was OK but not earth shattering.
I then tried a pear recipe that I found online, which worked very well. Chop an onion, or two, and fry until transparent, and chop enough pears into quarters or eighths, depending on size, to almost fill a small casserole when mixed with the onions. Being organic, there is no need to peel them, just give them a rinse beforehand. Add a few teaspoon fulls of honey, add some fresh thyme, and then lay some slices of belly pork over the top. We did four slices of pork, and that provided two meals each for the two of us. Great! So I then realised that I could use them to make a tagine, with pork or chicken, or as a vegetarian meal, use a recipe for, say, a lamp and prune tagine, but vary it to your chosen meat or no meat. Once again you may need to add some honey to offset the bitterness of the pears, but as they ripen there is less need for this.
We realised that the pears make a great vegetable that can be added into casseroles, or as a side vegetable. The chunks hold their moisture very well and have a pleasant, light, flavour. The other way of using them is to cook off and add into a mix of fruits, such as black or red currants, gooseberry, etc. The way in which the pear holds its shape and moisture is very satisfactory. So, we have found another product of our garden which can be used in several ways, every one of them great.