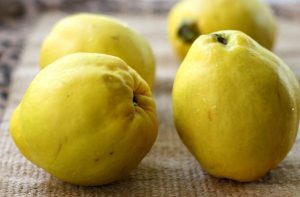 When made my first selection of plants for the forest garden I included two types of quince, and, subsequently I bought some further examples. I have these plants dotted into various bits of the garden, one is in the cottage garden flower bed where its pretty little flowers are reminiscent of a nearby azalea called “Geisha”. Sweet, orange/red, delicate flowers in very Japanese branches. Another is surrounded by black and red currants, gooseberries a Turkish Hazel and a pear tree. Two more are close to my garden shed.
Initially I gathered a handful of fruits, and bore them, with great ceremony, to the kitchen, where we looked at them, and wondered what to do with them. Insufficient for jam making, I tried juicing but, even mixed with other fruits we found them too tart. After a while the undervalued fruits eventually began to show the lack of respect that they has earned, and, after removing the seeds, they went off to the compost heap.
Last year – Bingo! Kilos of quince! Now we had to do something with them. Recipes say how good they are for making jam or jelly. We gave it a try. The frustration! Why hadn’t we tried quince jelly before? Immediately it became our favourite conserve! Sharp enough to replace marmalade at breakfast, pure comfort food with peanut butter on a tea time sandwich. Its perfect sharpness cuts through the cloying texture of cheeses, and it brings cold meats up several steps in the enjoyment stakes.
I have seen quince used as a rather unsatisfactory hedging plant, too random in its branches, bare in winter; huge fruits hanging in melancholy isolation, unloved and undervalued, but, in the forest garden it is a Prince! Early flowers brightening the late winter, deep green foliage filling the summer, and then these marvelous, tart, fruits that can provide so much pleasure. I might need to increase my stock of them!