All sorts of busyness outside Ty Olaf this morning.  We were reminded of the time a group of guys were unloading a van beyond the Visitor’s Centre.  We were inquisitive and asked 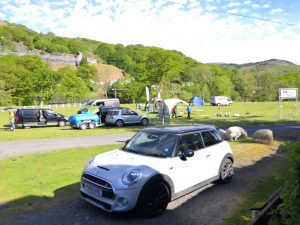 what was going on.  “I can’t tell you” one of the workers said, “but its going to be epic.  And it was.  The word EPIC in mirror finish 10 foot tall letters positioned in front of Caban Coch dam.  Today’s event was a lot more dynamic.  More and more cars and vans arrived, we had to find out more, but the sheep just kept on eating.

This event, it transpired, was the Berghaus Dragon’s Back Race which passes through the full range of Wales’ outstanding upland landscapes, including all of the highest mountain rang 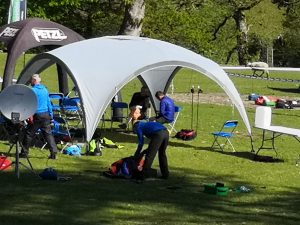 es in the country.  The race is 215 kilometers long with, apparently, 15,500 meters of ascent.  The runners have to make their way across open moorland with just sheep tracks to run on.  Having started last Monday , 20th May, at Conway Castle, they had started on this day, Thursday 23rd, in Aberystwyth, pausing here before running on to Llandovery.  The approach to the stopover outside Ty Olaf was across the top of Y Foel, the hill opposite, coming down the Madog valley to run, briefly, along the road past the hotel then the old railway line and across the river.  The race is generally recognised as having “toughest mountain race” status. 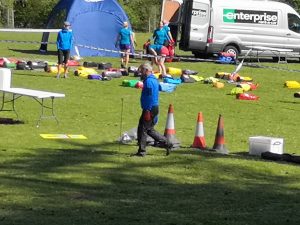 This morning we had been entertained by an ever growing band of volunteers as they arrived, unloaded vans, put together strange structures, and prepared for the runners to arrive.  There are, apparently, 120 volunteers this year, quite a few of them outside Ty Olaf.  They carry out  a wide range of jobs including erecting the campsite each day, manning checkpoints, transportation, safety monitoring, course checking, medical assistance, cateri 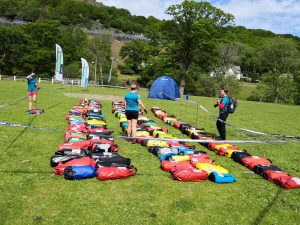 ng and general administration. Many of  the runners have spoken about how much they value the “slick”, “effective”, “friendly” and “smiley” team working behind the scenes of the event.  The overnight campsites are enormous, 56 tents each housing 8 runners, then administration, medical care, catering.  Each site set up and cleared daily.  Then there are the checkpoints like the one outside our house, much smaller entities, but essential.

Each runner has an overnight bag and a stop over bag.  The stop over bags are all numbered and are laid out ready for the runners arrival.  Each bag has to be waterproof because they m 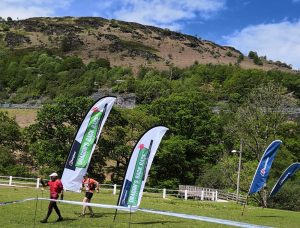 ay be out in rain, and can include food, drinks, gels, the essential plasters for blisters.  As the runners appeared, running down the bank opposite a “spotter” radios their number to the volunteers, so that as he or she arrives their bag is passed to them.  Someone else refills their water containers and once they have “clocked in” they have a few minutes rest before setting off again.

As each runner arrives they are greeted with cheering and welcome.  Many of the volunteers are themselves runners who have taken part in previous Dragon’s Back runs, and know exactly how this year’s runners feel.  Gradually the first few runners resting in the gazebo are replaced by others. 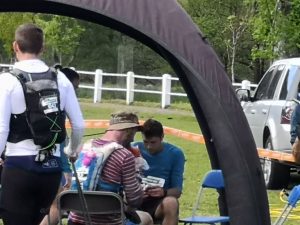 The organisation is amazing, everyone knows what to do and the importance of what they are doing.  By mid afternoon all the runners had passed through and the stop over site was removed without trace and moved on to tomorrows site.  The whole 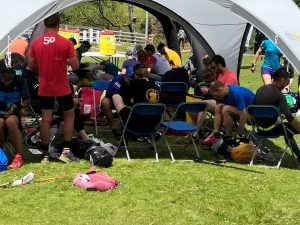